Some more of the ridiculous Paliwood propaganda…

Posted on November 17, 2012 by littleadvisor

Yes, there are horrible things happening in the Middle East.

Hundreds and thousands of Syrians are being killed by other Syrians.

Hundreds and thousands of Kurds are being killed by Iraqis, Turks, Syrians and Iranians.

Hundreds and thousands of Iranians are being killed by their own government.

But what do we have in the news? The Palestinians. The group of people shooting rockets endlessly at Israel for more than a decade, get the front lines everywhere. Surprisingly – as victims!

So what do we have?

They claim Israelis target children. That’s not true, and not only that it is not true – its the opposite of the truth. As we can see from their own TV reports, they actually encourage children to go to places where the Israelis might attack. Why? To prevent the attacks (because they know Israelis actually try to avoid harming civilians), and show a mountain of dead bodies if the attack is not prevented.

They claim Israelis are shelling Gaza, but that’s not true. While the Palestinians are deliberately firing rockets at the Israeli cities in an attempt to terrorize and kill civilians (using their own civilians as shields), Israelis are actually pin-pointing their attacks. The Israelis know exactly who or what it is they’re going to blow up, and target specific individuals or locations. Not indiscriminately shelling civilian neighborhoods.

I already wrote about Paliwood this week, but here’s some more since then:

1. The Palestinians took a picture of a Syrian wounded, and posted it as their own. 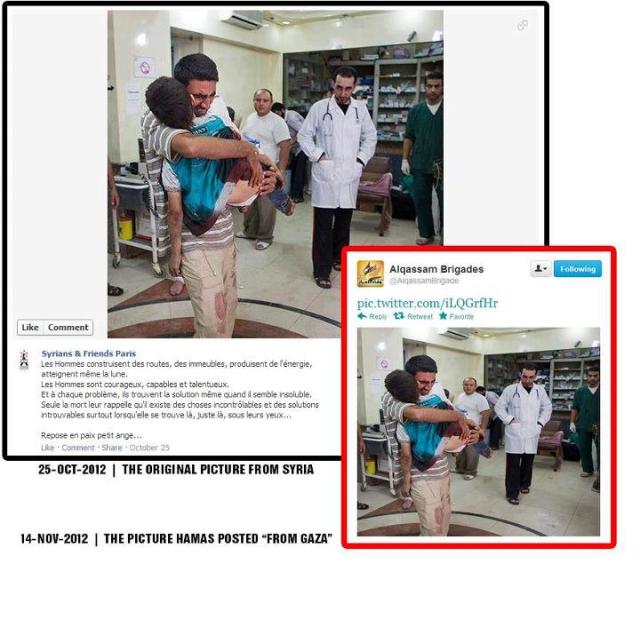 Palestinian wounded turns out to be a Syrian wounded

Israeli wounded child claimed by the Palestinians as their own

Its not the first time. And not the last.

But next time when you see pictures spread by the Palestinians – ask yourself: do you trust them? Well, if you still think you should trust them – watch this.

This entry was posted in News and Politics and tagged Gaza, Israel, Paliwood, Scams. Bookmark the permalink.

3 Responses to Some more of the ridiculous Paliwood propaganda…